THE LEGEND OF LOVER'S LEAP

From MadisonCountyIlGenWeb page on Facebok:

Laughing Moon [some stories name her Laughing Water], daughter of Ouatoga, chief of the Illini tribe, would sit on the great stone high on the bluffs, dangling her feet over the edge, dreaming of the lover that would come to her one day. One night, under the full moon, she sat on the stone, and below she saw something swimming in the river. Soon she could hear the noise of someone climbing the bluff. A young brave appeared before her, wearing a belt of yellow beads. She knew he was a member of the Osage tribe, the most bitter enemy of her father. Black Otter was his name, he being the best swimmer in the tribe. He told her he had seen her many times, sitting on the stone, and decided to risk everything to see her.

Each night they met on the bluffs, and he told her many stories of hunting and swimming. Soon they fell in love, and he asked her to go away with him. However, some in the Illini tribe had seen them together, and told her father. He was greatly angered. Going to his camp, he selected an arrow and dipped it into the poison of the Copperhead snake. He crept down to the great stone and watched the lovers. Pulling back his bow, he let the arrow fly, but the arrow struck his daughter, Laughing Moon, instead of the young brave. As he watched her fall to the ground, his heart filled with grief. Black Otter, seeing what had happened, took Laughing Moon in his arms and jumped over the cliff into the deep waters. Each night thereafter, Ouatoga, old and saddened, went to this rock and looked out on the moonlit river. The old chief died in his grief. From this day forward, the great stone was named "Lover's Leap."
************************

Lover's Leap was located at the foot of Prospect Street in Alton, high on the bluff. It was on this bluff that supposedly the Piasa Bird was killed. The Lover's Leap rock was blasted away on May 25, 1950, to make room for the Great River Road. 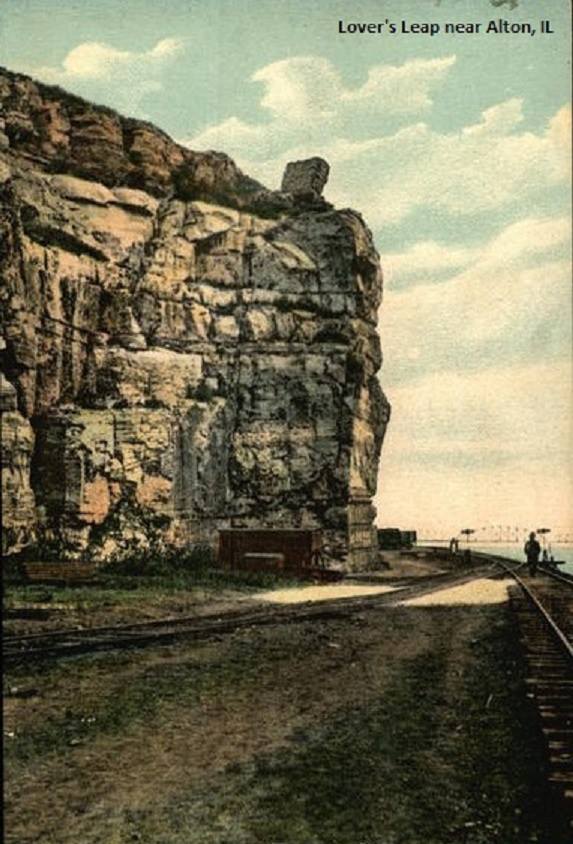 Before the river road....

1924 pic from a Charlotte Stetson book on Alton, also before river road, when only a train track ran along the river.